January 09, 2022
I suppose now is as good a time as any to try for some self-improvements. Mind you, I’m speaking less to things like weight loss or diet plans and more to getting well as a whole. 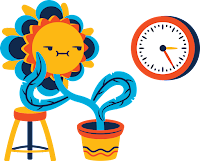 Most upsetting is probably me trying to get back on a schedule. I’ve fought against schedules my whole life--when it matters at least.

Unisom, CBD, melatonin, kava kava, and chamomile have all tried and failed to knock me out.

So, let's not make any resolutions except to say that I hope to get back into something closer to a routine and use blogging (both public and private) to reflect a little more than I'm used to.

I say this, of course, at 2:23AM on a Monday morning because I over-caffeinated too late in the day so that I could record a final presentation for the first semester of my MBA.

Also, did I mention that I decided to go to a super-spreader event because I bought the tickets a long time ago? It was a WWE PPV, and I think it was worth it even after the booster shot and multiple tests before and after the event.

Illustration by Thierry Fousse from Ouch!